It is now well established that the sharp rise in the number of earthquakes in the central United States since 2009 is due to human activity, in particular the deep injection of waste water generated by fossil fuel production. It has long been assumed that, in California, so-called induced earthquakes do not contribute significantly to earthquake rates, or hazard. Indeed, it is safe to assume that, overwhelmingly, seismic hazard in California stems from the active plate boundary that runs through the State. Looking back, however, at some of the moderately large earthquakes that struck the Southland during the early 20th century, there is evidence for an association with oil production during the early oil boom years in the Los Angeles Basin and elsewhere. While the results suggest that there can be a risk of significant induced earthquakes from conventional oil production, the rate of natural earthquakes within the Los Angeles Basin might actually be lower than previously estimated.

Susan Hough graduated from UC Berkeley with a degree in geophysics in 1982 and received a PhD in Earth sciences from UC San Diego in 1988. Since 1992 she has worked as a research geophysicist at the US Geological Survey in Pasadena. Her research interests include earthquake ground motions, induced earthquakes, and seismic hazard. She led deployments of portable seismometers following a number of damaging earthquakes including the 1989 Loma Prieta, California, 2010 Haiti, and 2015 Nepal events. She has co-authored over 120 articles, and was elected Fellow of the American Geophysical Union in 2009. In addition to technical articles, she has long-standing interests in science communication, having authored five books on earthquake science for a non-specialist audience as well as numerous popular articles. She has further led USAID-supported capacity development projects in a number of countries including Nepal, Haiti, and Myanmar.

Willo is a product being developed at the DesignLab by Supplyframe. The DesignLab staff will talk about how it went from something that only existed in someone's head to a product installed in 21 rooms at a hospital in Kansas City, using only the tools available at the Lab.

Dan Hienzsch is the Resident Engineer at the Supplyframe DesignLab and has overseen the manufacturing of the Willo product from the initial concept sketches to component prototyping through to product installation.

Majenta is the Lab's Staff Designer. She was responsible for taking the raw outputs from the fabrication equipment and developing finishing processes to turn them into showcase pieces.

Giovanni Salinas is the DesignLab Product Designer. He took the initial looks like prototypes and developed the CAD models into the final designs, optimized for the fabrication equipment at the Lab.

The DesignLab is at 30 E Del Mar Blvd, Pasadena, CA. You probably won't find street parking nearby, but please see this Google map (https://www.google.com/maps/d/edit?mid=z336KXOi6I8Q.kWuP10Ksdh4Y) showing the DesignLab location and nearby parking structures.

Using the Metro Goldline trains is quick and easy. It takes about 20 mins from Union Station in downtown LA to Del Mar Station, which is less than 2 minutes walk from our front door. Trains run about every 10 mins during the day and 20 mins at night from 11pm-2am.

There are also buses that serve Old Town Pasadena. The nearest intersection is FAIR OAKS/DEL MAR BLVD, PASADENA, CA 91105. You can find timetables or use the Metro Trip Planner at metro.net

Are you an organizer of Hackaday LA April Meetup ? 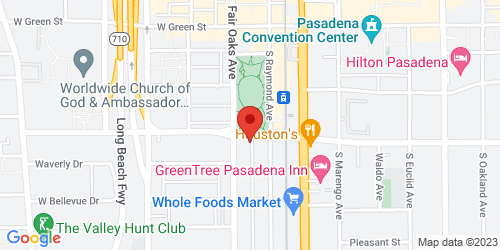