How to find us:
Coming from UBahn Station Naturkundemuseum after hotel Mercure, before Humboldt University take the driveway on the right, turn left at the end and then right again. Walk all the way to the back, through the passage at the end and in the last yard on the right take the last door with the sign "Nordbau, Treppe 15". Lecture Hall, Hörsaal 8, is on the second floor.

Alvaro Ortiz Troncoso: Running wikis at the Museum with Docker: past, present and future

The Museum outputs exhibitions, science papers, conferences, and so
much more. None of this would be possible without cooperation between
researchers, designers, organizers and of course admins and developers.
Wikis were introduced at the Museum in 2014 as an experiment to
improve cooperation within project teams. Alvaro will talk about how
Docker solves many of the problems of running a bunch of wikis on a
string, and also about pending questions we are currently trying to
answer.

Alvaro Ortiz Troncoso is a computer scientist and joined the Museum in
2014.He has worked at the Technische Universität Berlin and at Waag
Technology & Society in Amsterdam.

Jens Dobberthin: How we use docker in our project Naturkunde 365/24

The Project Naturkunde 365/24 aims to build a bridge between economy
and research. As part of the digitalization of the museums collection a
massive amount of digital media is produced. Essential part of the
project is to build a platform that allows access to this media, makes
it searchable and presents them in edited packages. Jens will give an
overview of the different components and how we use docker.

Jens Dobberthin is a computer scientist and project manager who has
worked in different Start-up in the media sector. At the Museum für
Naturkunde he is the system architect of the project Naturkunde 365/24.

Christian Kniep: Docker EE 2.0
With a 10y journey rooted in the HPC parts of the german automotive industry, Christian started to support CAE applications and VR installations.After getting bored with the small pieces, he became the InfiniBand go-to-guy while operating a 4000 node crash-test cluster and pivoted tothe R&D department of Bulls BXI interconnect. When told at a conference that HPC can not learn anything from the emerging Cloud and BigData companies, he became curious and is now leading the containerization effort at Playstation Now. Recently Christian joined Docker Inc to help push the adoption forward and be part of the innovation instead of an external bystander. :) Christian likes to explore new emerging trends by containerizing them first and seek application in the nebulous world of DevOps.

The Museum für Naturkunde - Leibniz Institute for Evolution and Biodiversity Science is an integrated research museum within the Leibniz Association. It is one of the most important research institutions worldwide in the areas of biological and geological evolution and biodiversity.

The collections are a unique cultural asset and comprise over 30 million items of highest scientific and historical importance.
Alongside knowledge transfer, research and our collections are the main pillars of the museum's work.

Within the project Naturkunde 365/24 we become an open point of contact for start-ups, SMEs, economy and society for the development of significant products and service innovations for nature and society.
One important part of the project is the implementation of a research platform to make the museum's digital assets searchable and available.

Doors open at 6PM, presentation starts at 7PM. Snacks and Drinks will be provided.

Are you organizing Docker at Museum für Naturkunde?

Are you an organizer of Docker at Museum für Naturkunde ? 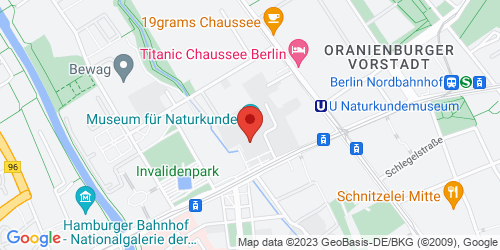